Our Hugo the Salamander is a friend at first sight. He will entertain your kids with his original tricks and games on selected dates. Hugo knows a lot of interesting fairy stories about mines but is also an expert at children´s games, and he knows very well that those who listen deserve a little surprise. A day spent with Hugo is a memory that is hard to forget.

The Story of Hugo the Little Salamander

Little salamander Hugo sat on a tree stump in the shade of the forest, counting his yellow and golden spots. He already counted twenty-one when someone disturbed him suddenly. A boy and a girl stood right in front of him.

How surprised was Sammy’s and Jane’s mother when she felt them tugging at her sweater already before lunch, telling her that they must go looking for Pleistocene! But because they were nice children and had eaten all the vegetables she gave them for lunch, too, she rode with them on a four-seat chairlift to the top of the hill Hugo had showed them.

When they took a good look around, Jane sighed: “I can see no Pleistocene. Just a lot of rolling mountains. How do we now find out why salamanders are spotty? How do we find Huey?”

„But I am here,“ a sweet voice said. “You’re standing on my nose! In Pleistocene, or the Quaternary, everything was huge, and so were the salamanders too. My tail runs all the way down to the Hodrušský tajch. Well, it’s good you have come. My ear has been itching like mad for the past three hundred years. Come a little closer and scratch my ear, please.”

Sammy and Jane run up a little and Sammy even did a few somersaults. Huey giggled cheerfully and said he had not experienced such a great massage in ages.

He told the children he could not scratch that itch himself because he was too big for that.  “Everything would shake and quake. I must have a permission from the minister of earthquakes.” Sammy and Jane looked at each other.  “We don’t think there is such a minister.”

“Well, then I will have to wait until they appoint one. The law is the law. One should obey it. Eleven million years ago, in the Tertiary, a mountain dragon sneezed here without permission so hard that he woke up the volcano of Štiavnica. It spewed out geysers of lava full of gold and noble metals. It splattered all of us and salamanders still wear spots since then!”

That’s how Sammy and Jane learnt why salamanders are all spotty. And to make sure there is always someone to scratch Huey when he gets all itchy again, a ski slope was built on his back. Children ski down his back all winter long, run up and down in the summer. Huey is happy and so is little Hugo. 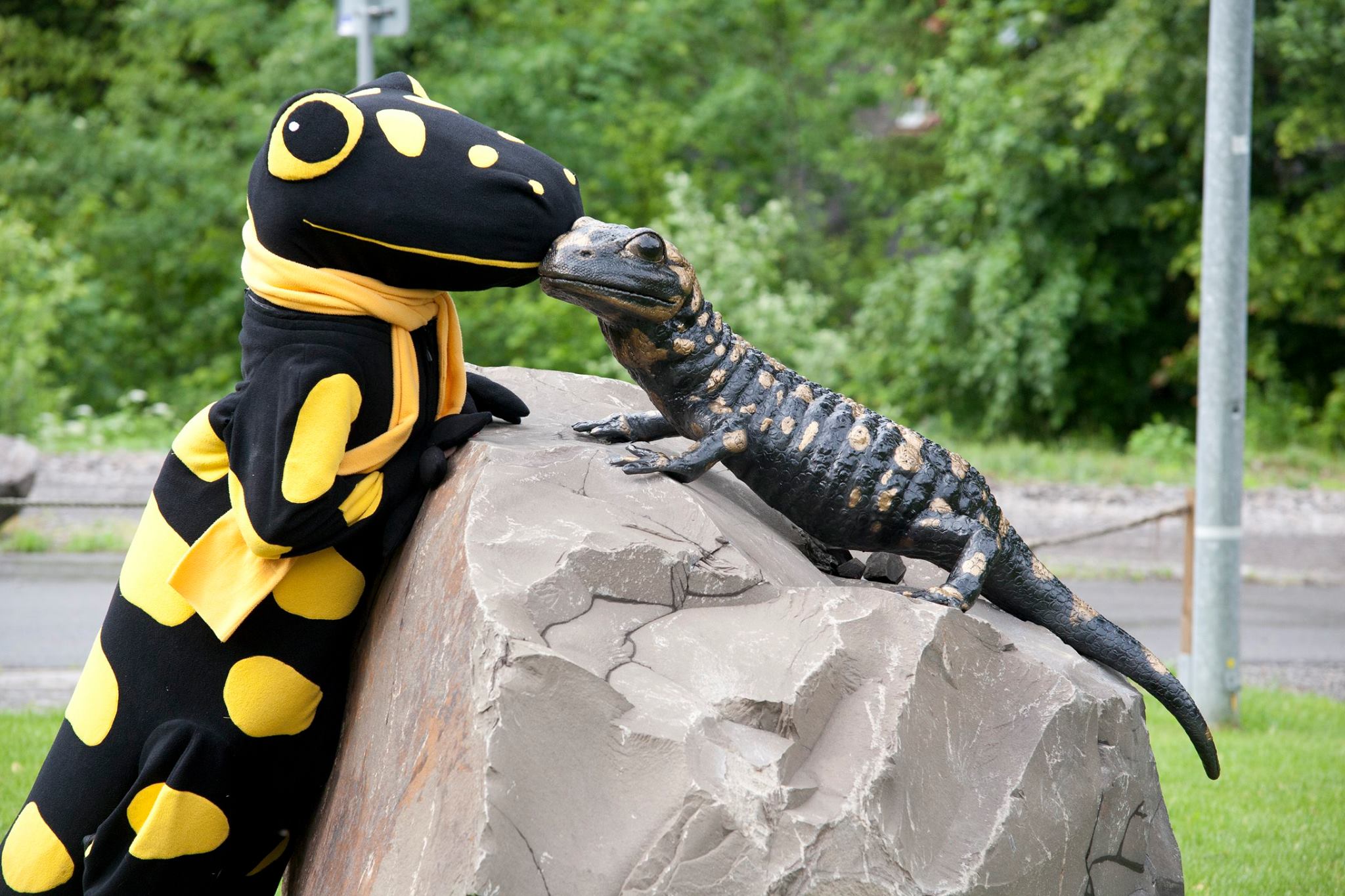 How they built a chairlift on Salamandra

I am an animal size inspector. It’s my job to make sure hedgehogs don’t grow bigger than a barn and elephants aren’t tiny. Elephants are pranksters, they like to hide under people’s cars. Take a look to see if one of them is not hiding under yours right now.

I had an emergency near Vozokany last year. A carp had grown so big he clogged the Little Danube river. Therefore, I missed going to the Štiavnica Mountains to tell local animals and beasts how big they should grow.

And so it happened that one little fire salamander called Hugo kept on growing and growing. Before I arrived, he already stretched tail to head from the Hodrušský tajch to the top of the Tanád hill. He felt embarrassed that he had let his body grow out of control. “It can’t be helped, Mr Hugo,” I said. “You are rolling down the hill for one and a half kilometre and are already all covered in snow. We have to put you in some good use.” But I did not know how.

I spent half a day sitting in the shade of Hugo’s enormous ear, but couldn’t figure out anything. But then a cross-country skier came passing me by. He was tired and asked me if he could ski down Hugo’s back to the valley.

I was still unsure, but Hugo’s eyes brightened.  “Could you please scratch me some seventy meters above my tail? It’s itching like mad.” The skier laughed and said he could. How big was my surprise when he returned the next day with his family!

“It seems, Mr Hugo, you will become a ski slope,” I said with satisfaction and the salamander happily agreed. I made a proper entry in the Record of Phenomena and unpacked my lunch. Before I could finish, a telegram arrived that a three-meter high squirrel was nibbling at the mountain tops around Strečno. I had to leave at once, but Hugo is still in his place.

A ski resort has since been built next to Hugo. It’s named according to him – Salamandra. Children and their parents from near and far come here skiing. Their skis and sledges scratch Hugo’s back every day. Go there to scratch him too! He’s just loving it.

Learn about new events and special offers.
You also get a chance to win a weekend for two.

Voluntary consent: This consent has been given on a fully voluntary basis. If this consent is to be given on behalf of a person under 16 years of age, the consent to the processing of Personal Data shall be given by his/her parent/legal guardian.

Withdrawing the consent: This consent to the processing of Personal Data for the specified Purpose may be withdrawn at any time by a written notice sent to the Controller’s address at DODDY spol. s.r.o., Zochova 3, 811 03 Bratislava, or by email to osobneudaje@salamandra.sk. If the consent is withdrawn, the Controller will no longer process the Personal Data for the specified Purpose, the Personal Data will be mechanically erased (destroyed) and will not be further processed in any database.
More information for data subjects concerning the processing and protection of personal data can be found here. 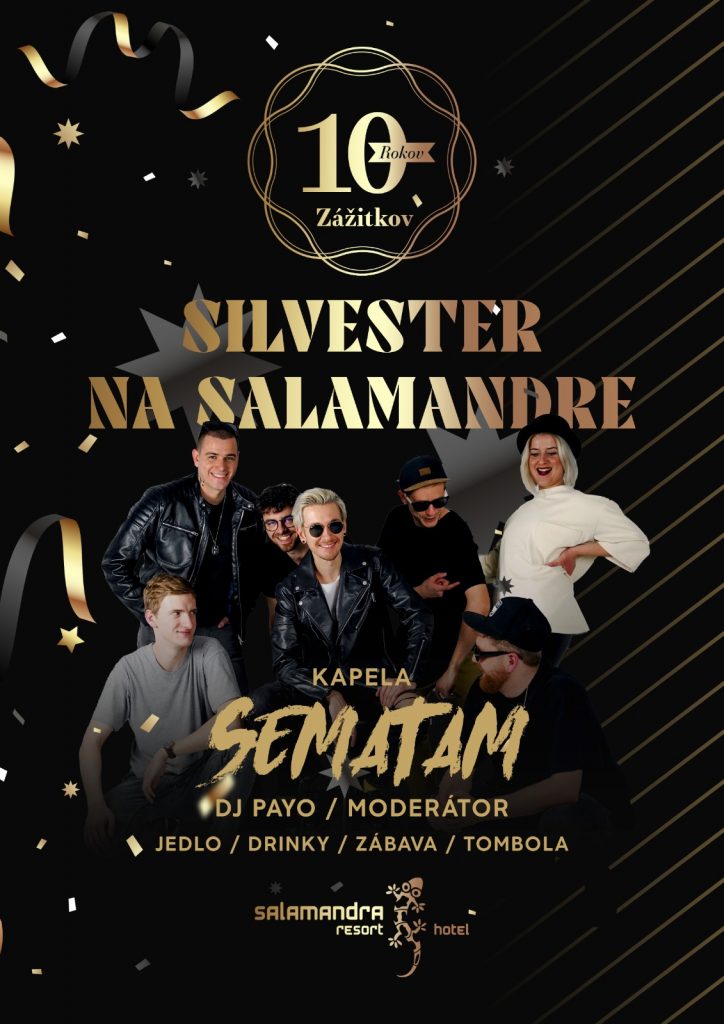